History - true or false or irrelevant ? 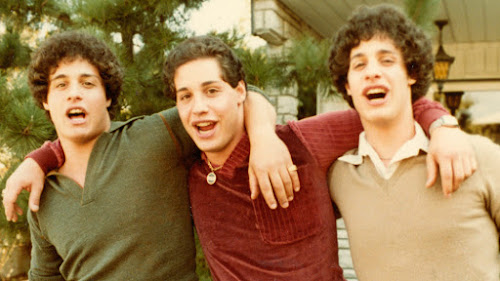 An enthusiastic history teacher, Anne Akronism, arrives to face her first students in her first class ever.

In her defence, she considers that she is not simply teaching history, but helping to make history.

She arrives to find three adolescent boys sitting in a row, all have their heads bowed down, each is reading a book.

She is a bit surprised to observe that the covers of the three books are exactly the same.

"Yes Ma'am" the three say in unison as they look up.

She gasps. The three boys are dressed quite differently - one has tattoos on his arm, the one next to him has a prominent crucifix around his neck, and the third is dressed in a neat-preppy way - but the three appear to be physically identical: same eyes, same nose, same hair, same height, same build.

As she seeks to calm herself, she asks the three boys what book they are reading.

The boy with the tattoos responds first: "I dunno!"

She asks him his name, he responds: "People call me Nihlo."

"So Nihlo, aren't you interested in the book, its name, its author?"

"Yes, yes, I am interested in the book, it is a great book, I'm really enjoying it. But I judge a book by the contents, not by the title and author that appear on the cover."

The wearer of the crucifix jumps in and says "Excuse me, it is a book called Silas Marner by George Eliot."

And what's your name" she asks?

"I'm called Faithie by my mates."

She turns to the third kid, the preppy looking one, and remarks: "You appear to be reading the same book. What do you think of it?"

"Well, not exactly the same book, because we each have our own copy. But yes it appears to be the same book that Nihlo and Faithie are reading. Its proper title is Silas Marner: the weaver of Ravelhoe, and the author's name was Mary Ann Evans, but she published under the name George Eliot."

The teacher is impressed. The other two boys are not.

"My friends call me Struth."

"And all three of you are from the one family?" she asks.

The boys laugh out loud.

"Not likely" says Faithie responding to the confusion showing in the teacher's eyes.

"Forgive me my presumption. But you all look very similar. Perhaps if you each tell me a little about your history. Who wants to start?"

"Well yes, I'm glad to have you here today, and yes, I guess that is what counts," the teacher responds.

Faithie follows: "Well, I know my history perfectly. My parents tell me that I was conceived through the grace of God on the day of St Peter and St Paul which is June 29, and I was born nine months later on 1 April 2006 which was a Saturday. This was a sign of God's blessing because it would have been awkward if Mum had laboured on Sunday for God has commanded that we must not labour on the Sabbath in recognition of God's act of creation, and his resting on the seventh day."

Struth, the third boy responds: "Actually, Saturday is the Sabbath, Sunday is the first day of the week."

The teacher delicately intervenes, "Yes, there are a variety of views, and your story?"

"I was given up for adoption by my mother who was a drug addict, and she died of an overdose shortly after my birth. My father was incarcerated before my birth, and died in prison without ever seeing me. I was one of three identical boys, but we were separated at birth and I ended up with this couple, Marie and David, who've looked after me all my life. So that's my history."

Which of the three boys is happier? Why?

How important is history?
Is it important for history to be true, or will false history serve just as well? Is it better to have a history, even false, than none?

(The celebrated case of the three identical strangers provides a factual - even historical - basis for this "thought-story").
Posted by Ssh at 23:09