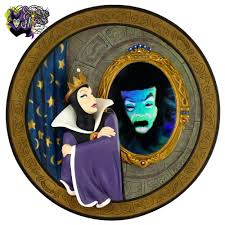 According to the magic mirror on the wall, Snow White was the fairest by far.

But that's not fair! And so the beautiful but vain stepmother set about fixing the problem.

We detest inequality in general, but we can easily confuse this with the detest of those who have more than me.  We battle inequality, but we overlook what we have, and also what others have not.

That "Harry Potter girl" Emma Watson, charmed us with her reminder of the dimensions of inequality that we fail to consider. And the appearance afterward of trolls and witch-hunts simply underlined her point.

In missing the inequalities, we miss the solutions too. Annabel Crabb observes that career women are frequently asked about how they manage their family lives while men never are. Her solution is simple: "I don't think the answer is to stop asking women. The answer is to start asking men."

Asking both working women and men about how they manage their home life highlights that someone must manage it, hence the title of Crabb's new book: The Wife Drought.

Unpaid domestic labour is not generally counted in measures of economic activity but is estimated to be equivalent to up to half of Gross Domestic Product.

Who does the work at home? Women do. At a rate almost two times that of men and even greater if they have children. This is true even in fairytales. The seven dwarfs agreed to protect Snow White in return for unpaid household labour.

Men are generally expected to provide and do so, even at a personal cost which often becomes apparent only at their deathbed. Working too hard is one of the top regrets of the dying says Bronnie Ware, and particularly among men.

Statistics show that men have higher rates of pay than women with one notable exception. The fairer sex makes a good deal more than men in fashion modelling.

Statistics also show that men have higher rates of being victims of violence, assault, work-related injuries, suicide and earlier death.

As Sam de Brito quips, "I'm surely not the only man who'd be happy to swap my 8 per cent for an extra five years of life, more time with my kid and the guarantee I'll not be found swinging from a beam when I turn 55."

Just as a corporate women must explain how she manages her home, stay-at-home fathers must explain why he is neglecting his career. Fathers stepping up to help in the family are questioned, literally and figuratively. We do not seem to like men being around children as reflected in the following:
The book The Other Glass Ceiling provides other instances of man-fear: a dad shopping for his daughter's undies is deemed a security risk; a single father searching for an au pair is suspicious.

We don't even realise we're treating others unequally. Consider the following scenario:

"Chris is a single parent of two and the director of marketing for an electronics firm. Scheduled to present the key quarterly sales report to the Board, Chris arrives 15 minutes late after dropping the children at school and day care. In addition to dishevelled hair, there is a noticeable stain on Chris’ suit, the result of the young girl vomiting at the end of her car trip after a hurried breakfast."

Research shows that 95% of people think that Chris is a woman. But Chris' gender was not stated. We often fail to see our own unequal treatment of others.

Striving to reduce inequality is important, but equality is a myth. Men and women are not born equal and even the most earnest efforts cannot rectify all the inequalities as the Monty Python team explain to Loretta.

And some efforts to reduce inequality create more damage than good. According to relationship expert John Gottman, when communication is reduced to criticisms and contempt, the relationship is in trouble.

The gender-war is not helpful. In tackling one inequality, we may create another. In the original Snow White, the evil stepmother is forced to put on burning hot boots at Snow White's wedding and dance until she dies.

The moral of this tale is that equality is not even true in fairy tales. Our goal is to reduce inequality, to exchange inequalities.

Ask both women and men, "How are you managing your home life?" Encourage fathers to step up and mothers to let go.


Now just share your toys nicely, and we'll all live happily ever after.
Posted by SJ at 16:22