Use smaller plates - you will serve less and eat less 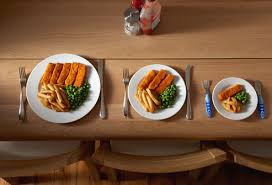 There's a simple way you can help yourself reduce the amount of food you consume: just change to smaller plates.

So now there is a simple trick which encourages us to serve smaller portions: use smaller plates.

However, this review reconciles these conflicting findings and shows that plate-size does help reduce consumption if certain conditions hold; specifically, if the consumer is self-serving to the smaller plate.

If the portion-size is fixed, and served onto a smaller plate, it will not help reduce consumption.

The important condition is that the person serves their own food onto the smaller plate, as at a buffet. In this situation, using a smaller plate will encourage people to serve less and eat less.

This review of over 50 studies examining the effect of plate-size shows that the effect is stronger if people are unaware that their consumption is being monitored. If you think you're being watched, then the plate-size effect declines.

The study has two implications. First, if you want to study the effects of modifying how food is served, it is best do so without letting people know what you are doing! Do the study in the real world, not in a laboratory where people know you are studying their consumption.

Secondly, importantly and more pragmatically, if you want to help yourself eat less food, use smaller plates.